skip to main | skip to sidebar

Ljajic deal dead - Manchester United is bad for your health 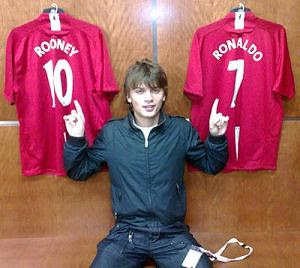 So once again we wake up to a bit of a PR disaster this morning as we learn that the plug has been pulled on signing the youngster dubbed Little Kaka. Im gutted about this.

Much has been made of the young Serb Ljajic. Never before has a youngster had such a build up to joining a club, but that is the way it sort of works at United. Every deal is scrutinised in the press and to be fair, United do a lot of initiating this hype. Plenty of pictures have been released by the club over the past 12 months of Ljajic training with the first team...Ljajic cuddling up to Berbatov and Giggs at Carrington...Ljajic with a United shirt...the usual fandango that goes on when a team tries and sells to its fanbase a new player that we knew little about before last January. Youtube has been battered by hits of fans (like myself) desperate to see his skills. Im even part of a facebook group that has been following his individual development at Partizan this last year. But now, in the flick of a switch and a garbled club spokesman statement the deal is now dead.

First and foremost, if Fergie does not think this lad is worth £10 million after being able to monitor him closely for 11 months then he is of course doing the right thing. Breaking the poor lads heart now is better than him joining the club with a fanfare only for him to be slaughtered if he does not have the skills to pay the bills. But as a fan that lives and breathes this club like many of the Faithful, you cannot help but feel a little bit duped on the whole saga.

As fans we invest alot of time on the club...its an inconvenient habit most of the time. We read up on every possible transfer. We show a level of interest that is so intense that if we had all applied it at school we would all surely be doctors with lots of letters after our names now. Its a focus and dedication that you just cant buy, or switch on or off. So when things like this happen you do wonder if we should all step back a little. Should we wait for players to do it on the pitch before we pontificate about them? Maybe. Do we let go of our obsession a little so we dont feel hollow disappointment when deals like this collapse? There is a strong case for this.

I remember a few years back when United had all but signed Ronaldinho from Paris St Germain. Then United tried to haggle one too many days on the price (thanks for that Peter Kenyon) and Barca swooped. The rest is history. The cloud did have a silver lining though as we went on to sign a young Portuguese lad to play on the wing. The point is that United do not handle these things well with the press. We know how in Spain that Madrid have the power to manipulate its press in order to openly tap up players but United do not have that luxury over here. Therefore when the orchestrate deals like the one for Tosic and Ljajic, and then sell it so blatantly to the fans..well, its all a bit of a con job. Whats next? Will we dump Mame Diouf before he kicks a ball? Should we be bothered about this French boy Pogba?? We hear how great they are before thay are ACTUALLY great. It makes me feel i should be more cautious on these matters. I once told many how great Manucho was going to be after watching him perform brilliantly in the last African Nations Cup...and look what happened to him.

One thing i will add is that i 100% back the manager. If Fergie thinks he is not good enough then that is fine by me. We all know that he is human and is liable to make mistakes like us all, but he is the one that has taken this club from also-rans in the late 1980s to where we are today. Therefore, i will back him until he one day hands the keys to Old Trafford back to the Glazers. We know that he probably missed a trick with Diego Forlan and Giuseppe Rossi, but we also know that when they did get their chances in a United shirt that they generally flattered to deceive. There will always be players that slip through the net. Lets hope we dont see Ljajic in the future, performing miracles at a Madrid, or marvelling the crowds at Milan. Lets hope that Sir Alex has got this one 100% correct.

Rob B
Manchester United fan since the age of 9 when he saw Norman Whiteside curl the ball into a Wembley goal in the dying minutes. He is an Old Trafford season ticket holder in the North Stand Tier 3...and cried tears of joy, on his knees with the many in Moscow. Rob is a contributing author/editor at Man Utd blogzine 'The Faithful'